< Back to news listing

Establishment of the ICB and SEA Advisory Board 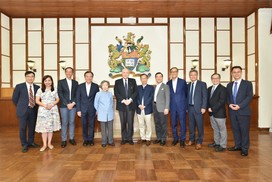 As a prelude to the 10th Anniversary of the Institute for China Business (ICB), the ICB and SEA Advisory Board was established on 13 September; its first meeting was held on the same day.  As a top-ranking think tank with abundant international resources and experiences, the Advisory Board keep a close tab on the pulse of the commercial and social development trends in China; members are equipped with global forefront corporate management experiences and business insights.  Together they will enforce and promote discussions and exchanges among leaders from political, economic, commercial and educational sectors; ideas and visions will be heeded as part of a greater plan to sketch out long-term development strategy of ICB and SEA.

On the meeting, the senior management of HKU SPACE, including Director of the School, Professor William K.M. Lee, Deputy Director (Business and China), Professor Liu Ning-rong sat together with the Board to discuss the orientation of ICB and SEA in the next decade.  The discussions were focused on a number of topics, such as the potential demands of Mainland talents, the integration of professional resources from Hong Kong and Mainland China, the development opportunities in the Greater Bay Area and Belt and Road regions.  The Board's members also suggested ICB and SEA to share innovation and success of alumni with a wider audience, which they believe will bring positive effects to the business environment in China.

Elites of the political and academic circles gathered to map out the future of ICB and SEA. The Board will participate regularly in discussions about major projects and development plans, providing prospective and practicable suggestions to help guide the direction.  The Board will also promote collaborations and encourage effective interactions among the Institute and Academy, and the political, business and academic circles. It aims to build up a global resource network in preparation for the long-term development of ICB and SEA; to put forward academic research and educational development in line with the changes of time; and to cultivate talents who are competitive on the international level.

The establishment of ICB and SEA Advisory Board is the prelude to a series of events celebrating the 10th Anniversary of ICB.  Among the various activities, an around-the-global ultimate journey -- ‘Challenge Yourself, Exceed Yourself’ -- jointly organised by ICB,  SEA and alumni from around the world, will take participants to cross the world’s biggest desert Sahara, to explore the world’s coldest continent Antarctica and climb up to the world’s highest mountain -- the Mount Everest’s  base camp. The School will also host a series of forums in different cities in Mainland, inviting alumni to share their ideas and insights.

The 10th anniversary ceremony of ICB will be held on 6 September 2020 in Hong Kong.

The members of the Advisory Board are: