Executive Charisma, Presentation and Communication Capability through the Study of Acting
行政人員技能課程:從舞台表演到管治能力

This course has been included in the list of reimbursable courses under the Continuing Education Fund.

Executives of the modern time require more than technical skills to be effective and successful. While educational programmes offered by traditional universities and colleges covers many of functional/technical knowledge (hard skills), the development of soft skills has been long neglected. Traditional programmes also suffer the weakness of lacking of integration into practical domain. Theories, skills and even mentalities are all delivered through classroom trainings. From pedagogical perspective, it is least preferred and far from effective.

Statement of Achievement will be issued to students if they achieve 70% attendance or above and achieve a 50% mark from assessment.

The best management starts with managing oneself. The management of oneself requires self-awareness and understanding. Openness and acceptance of what you are, capitalize your strength and to rectify your weaknesses are essential to success.

This model featured theatre games, technical and skills as pedagogies to development leadership and charisma. It utilized pragmatic approaches to address real-life business situations in a fun and enjoyable manner. Students are expected to develop:

Self-Discovery - to understand the real self-concept and to identify one’s characteristics, strengths and weaknesses;

* The programme team reserves the right to change the above timetable if necessary. 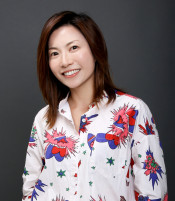 Jenus graduated from the Hong Kong Academy for Performing Arts, where she received her BFA(Hons), major in Acting.

She was awarded the Best Supporting Actress Award in the 20th Hong Kong Drama Awards. In her years of acting study, she was also awarded the Outstanding Actress Award and Jackie Chan’s Scholarship. Before going to drama school, Jenus had studied as an exchange student in the United States, where she gained her first stage experience and was inspired to be a stage actress.

She has been working with different theatre companies and performed in various productions such as the musical The Animal Farm (as Clover) with Theatre Noir, The Passage Beyond and The Good Person of Szechwan with Actor’s Family, The Pajama Game (as Gladys Hotchkiss) and Once on this Island (as Andrea Deveraux) with 3AMI, Little Shop of Horrors (as Ronnette) and Les Misérables (as Éponine) with Chung Ying Theatre Company. She also sang in the cabaret Listen & One Night in Falsettoland in Concert.

Jenus is experienced in drama education and teaches for HKUSPACE as a part-time lecturer for years. She is also an adjudicator for the Hong Kong School Drama Festival, drama tutor and project coordinator for several schools in Hong Kong.

To know more about online enrolment and payment, please refer to the user guide of Online Enrolment and Payment:

Applicants must provide all the required information on the application form and any additional information as required after the intial application assessment. Otherwise the School may not be able to process the admission/enrolment further.

For continuing enrolment in the same course

If you are in doubt about the procedures, please check the individual course details, or contact our programme staff or enrolment centres.

The School provides a platform for online services for a selected range of products it offers. While every effort is made to ensure timeliness and accuracy of information contained in this website, such information and materials are provided "as is" without express or implied warranty of any kind. In particular, no warranty or assurance regarding non-infringement, security, accuracy, fitness for a purpose or freedom from computer viruses is given in connection with such information and materials.

The School (and its respective employees and subsidiaries) is not liable for any loss or damage in connection with any online payments made by you by reason of (i) any failure, delay, interruption, suspension or restriction of the transmission of any information or message from any payment gateways of the relevant banks and/or third party merchants for processing credit/debit/smart card or other payment facilitation mechanism; (ii) any negligence, mistake, error in or omission from any information or message transmitted from the said payment gateways; (iii) any breakdown, malfunction or failure of those gateways in effecting online payment service or (iv) anything arisen out of or in connection with the said payment gateways, including but not limited to unauthorised access to or alternation of the transmission of data or any unlawful act not permitted by the law.

Cash or EPS are accepted at any HKU SPACE Enrolment Centres.

Course fees can also be paid by crossed cheque or bank draft made payable to “HKU SPACE”. Please write the programme title(s)  and the applicant’s name on the back of the cheque. You may either:

Course applicants, who are holders of HKU SPACE Mastercard, can enjoy a 10-month interest-free instalment period for courses of HK$2,000 and over. For enquiries, please contact our enrolment centres.