Challenge ? I like it!An interview with the Director of HKU SPACE, Professor William K. M. Lee 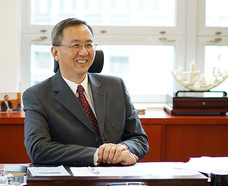 Upon arriving at Professor Lee’s office, one is greeted by intensely bright lighting, a precursor to the positive energy one
feels when meeting the man in person, and which he elicits in the people around him. Given the many challenges in today’s higher education field, however, when asked half-jokingly whether the Professor, who took up his new role in July this year, found his new office chair comfortable, he immediately responded with a cheerful smile and said “Challenges are everywhere, but I like that because they keep me busy!”

After working in academia for over 23 years – and having been Associate Vice President (Academic Affairs) of Lingnan University and Executive Director of the Hong Kong Council for Accreditation of Academic and Vocational Qualifications, Professor Lee said his working directive was simple, “There will always be problems, but if you tackle them openly with your colleagues in the right spirit, the problems can be solved.”

With his research background in sociology, Professor Lee well understands that for many colleagues the office is almost a second home where colleagues spend a significant amount of time at work, and hence he treats them like family, while believing firmly in the management philosophy of transparency and fairness.

When speaking of his guiding philosophy in life, he said that his grandmother taught him that though nothing comes free in this world, money is not the most important thing. “I remember when my grandmother was passing away, she had lost much of her short-term memory. She even forgot who my wife and my 13 year-old daughter were. But when she only remembered me and she talked about how she looked after me when I was a child, it was a strong awakening for me that when life is at its end, we can only grasp at those core memories engraved in our minds, while money and fame are but passing clouds and puffs of smoke.”

But while chasing power and fame may be meaningless in the end, that does not mean that one should do nothing at all. In the Professor’s view, nothing worthwhile in the world comes easily, only the fruits of hard labour are truly sweet. This means that one should approach every activity with the attitude that whatever you can do, you should do it well and enjoy the process, whether at work or at leisure. “Life is a journey, with problems to solve, lessons to learn, but most important experiences to enjoy.” Professor Lee said.

Professor Lee has been an avid tennis player since he was young. In his youth, he sometimes trained for ten hours or more in his youthful fervor to enhance and refine his tennis skills. This not only made him a person with the potential to do well, but one who actually did do well. Not only did he represent his school at tennis at the University of Toronto, he played for his artillery unit while serving in the army in Singapore.

Even when he came to live in Hong Kong, he represented his housing estate and won numerous awards and accolades. However, due to a knee problem in recent years, he has retired from the tennis battle lines and now spends his free time cycling and jogging.

But Professor Lee has far more work than hobbies to deal with, and every day he faces mountains of documents to be handled both wisely and well. It’s not an easy balance, but the Director laughs and tells us that his personal recipe for invigorating his mind, is actually exercise! “When you exercise”, he said, “your brain is working, and your blood is flowing, and this is when your brain is most active. It is also the time to clear your thoughts, strengthen your body and de-stress! With regular exercise I can keep my mind sharp, so eventually I can solve any problem”.

So, if you’re thinking of brainstorming with the Director, go out on a sunny day and you may come across him on his bicycle, but you’ll have to work hard to keep up!