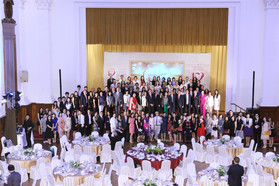 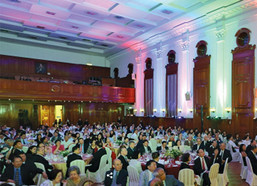 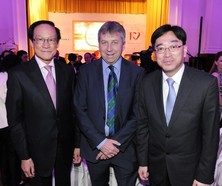 Since its establishment over half a century ago, HKU SPACE has nurtured leading professionals in every field. To stay in touch with this vast array of talent, the HKU SPACE ALUMNI was formed in 2004. On 3 July this summer, the ALUMNI held its 10th Anniversary Gala Dinner at The University of Hong Kong’s Loke Yew Hall with over 250 alumni attending.

Guests included the Secretary for Food and Health, Dr Ko Wing-man as guest of honour, the Permanent Secretary for Labour and Welfare Miss Annie Tam, and the President and Vice-Chancellor of the University of Hong Kong Professor Peter Mathieson.

In his address to the guests, the Chairman of the Board of Directors Professor Edward Chen chronicled his relationship with the School back in the 1970s, when his first job upon graduation was to administer the Diploma in Management Studies of the Department of Extra Mural Studies of the School. This department was the forerunner of today’s HKU SPACE.

Professor Chen also pointed out that apart from teaching, he also worked as a one-man band managing the administration and hiring of tutors for the programme. It turned out that the present President of the ALUMNI Dr Darwin Chen was one of his students! On the subject of returning “home”, he laughed and said, “Life is a cycle, and I have a destined affinity with the School.”

Dr Ko is also no stranger to the ALUMNI, being one of the founding members who witnessed the establishment of the ALUMNI at the same time. Though taking up a different role, he had a similar sentiment and recalled with pleasure how he still remembers every evening meeting he attended as the group strived to build benefits for the alumni.

Dr Ko also shared memories from his days at the School. He said that he once enrolled in six Chinese medicine programmes at the same time within half a year, and never missed a single class, even thoughthey were held three times a week. He also said that the knowledge he learned in those classes helped him promote the development of Chinese medicine in Hong Kong.

Speaking of the ALUMNI’s current achievements, the President Dr Darwin Chen credited the success of the ALUMNI to the efforts of the founding President Dr Peter C. Y. Lee, who had a clear vision for the School, and constant support from alumni. He said that there are currently around 80,000 alumni benefitting from the Continuing Education Fund, making up around 12% of those who benefit from the Fund. He hopes the Fund will loosen their upper limit for applicants to allow those older than 65 years of age to enjoy the benefits of lifelong learning.

Distinguished Alumnus Lam Chiu-ying entertained guests with a stand-up comedy routine based on the history of the School, the programmes and the benefits of continuing education. He closed by quoting a Spanish proverb that the time and place of the gala dinner is not important, what is important is for everyone to be together, and that is what should be cherished.

Anniversary events have now come to a full close, and HKU SPACE ALUMNI anticipates advancing hand in hand with everyone, for another ten years.