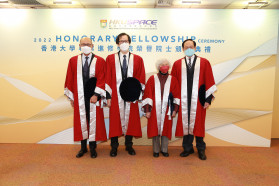 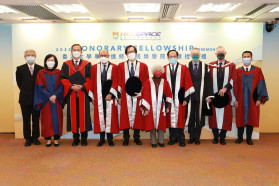 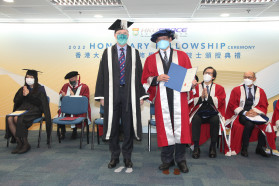 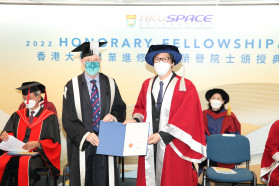 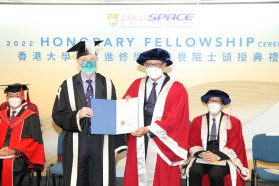 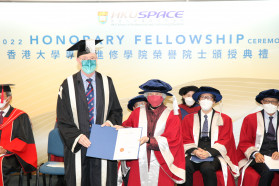 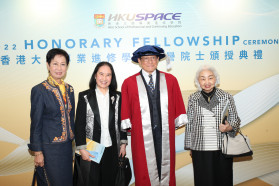 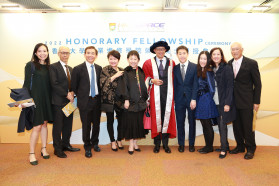 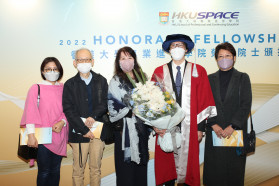 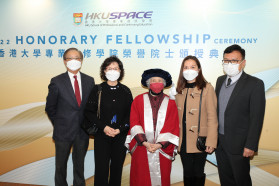 The 9th Honorary Fellowship Ceremony of HKU SPACE was successfully held on 2 December 2022. The School awarded Honorary Fellowships to four individuals who have made outstanding achievements in their respective fields and recognised their important contributions to Hong Kong society and the School.

The ceremony this year was held in the Professor and Mrs Enoch Young Lecture Theatre at the Admiralty Learning Centre, and was hosted by Professor Ian Holliday, Chairman of the HKU SPACE Board of Directors. Professor William K.M. Lee, Director of HKU SPACE, delivered the welcoming address. The Director and Deputy Directors presented the four awardees of the Honorary Fellowship for their awards and praised them for their contributions to the community in their own fields.

The four outstanding individuals who were awarded the Honorary Fellowship:

These four individuals are full of enthusiasm about their life and work. In addition to their great achievements in their own fields, they also actively guide and help younger generations. They are excellent learning examples for young people to follow.

The School has been serving Hong Kong for 65 years since its establishment in 1957. It has received strong support from leaders of different professional circles, who have made contributions to the School’s progress in different aspects and have promoted it to become a leading institution in providing high-quality continuing education. Since 2014, the School set up the Honorary Fellowship to recognise the elites who have made important contributions to the School, academia and Hong Kong, confirming the School’s close relationship with the local community and the education sector.